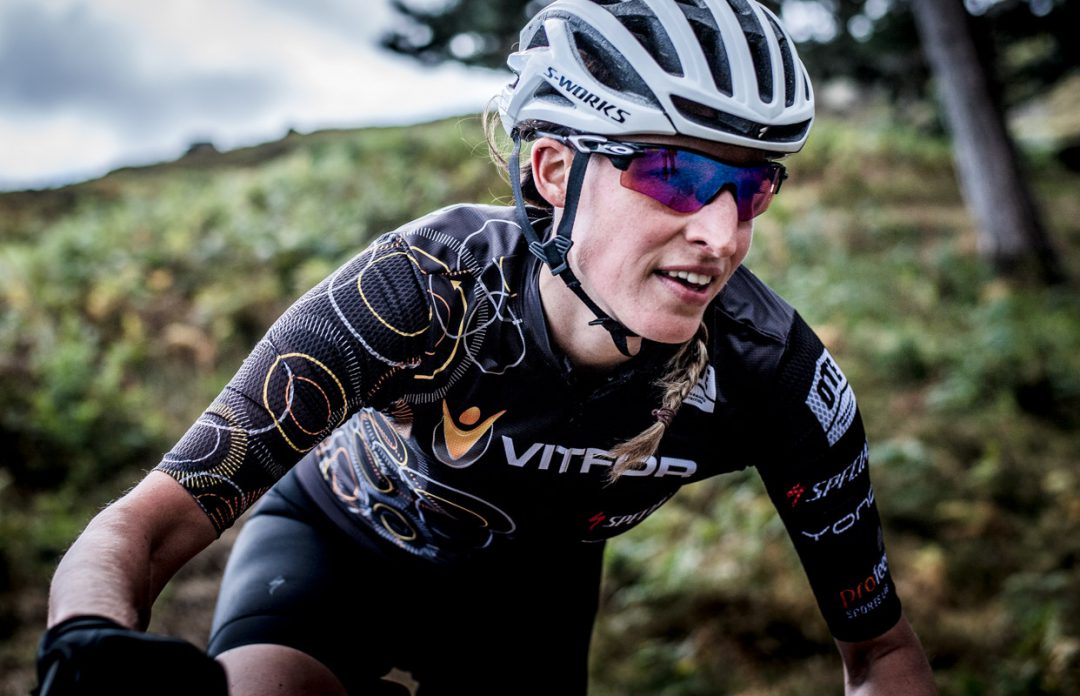 From beginner to national champion

In 2017, Amy Souter was crowned British Cycling 2017 XCM National Champion having only started cycling some four years previously. Here, Amy shares her story of just what it takes to get to the top.

Amy begins her story in 2013 when she gave road cycling a go. “I started road biking in late August 2013 as a way of building my mental and physical strength following a period of illness. I started with a triple ring road bike (I didn’t realise this wasn’t the done thing!) and rode a 5 mile loop around my local area.”

“Once I got brave enough, I joined a cycling club and that was it, I was ready for more! I began to ride every weekend and then it became an evening activity as well. In my first year I tried crit racing and got my Cat 2 in my first season.”

“I had a mountain bike that I bought when I left university, and at the end of 2014, I tried a social ride and started going out with a new group of friends. They taught me the perils of riding off-road in the dark over roots and rocks.”

“2015 was a tricky year for me and I barely raced and wasn’t able to train. But for some reason, I decided to try an XC race for a change. I thought it might help uplift me, but it turns out there was nothing ‘relaxing’ about it – ten times worse than a crit race, the course was hilly and technical; you can’t draft either, so there’s no time for a rest.”

“I remember going out for a practice lap and sitting in the back of the car afterwards wondering how on earth I was going to do it. Somehow I got myself to the start line and sure enough it was the hardest thing I’d ever done, but I survived and came second. That was me hooked!”

“That year I did another four races which was enough to persuade British Cycling to let me race in the expert category the following year – I was desperate for more competition and to try the National Series races.  The 2016 season was the first time I raced XC throughout. I entered the National Series races, which I found terrifying but a real challenge. I got mixed results but won the regional champs and accrued enough points by the end of the season to get my elite licence.”

It’s at this point in Amy’s journey that she made contact with Craig Stevenson, Vitfor Founder and Expert Coach.  Amy admitted that, whilst she believed in her own potential, she knew that she had been winging it with her training.

“I went into the lab with Craig and got good baseline results that we could work from and tailor a training programme from there. I started training using Vitfor FTW and, although I came down with pneumonia mid-season, my performance started to see huge improvements.”

“I switched to XCM for the additional challenge and the National Championship was my 2017 focus. Securing the title was a huge achievement and I was absolutely delighted. I’ve been asked what the secret to my success is and would have to say perseverance.”

“The best thing about training with Vitfor is that it ensures I make the best use of what little training time I have and gives a structure and direction to my training strategy that I didn’t have before. Each time I race, I get stronger both mentally and physically, and become that little bit more capable.”

“It’s that feeling of beating the impossible – when you think you’ve emptied the tank, you haven’t – it’s always a question of mind over matter. If someone had said to me when I started racing that I would be National Champion within two years, I would have laughed, but here I am!”

One thought on “From beginner to national champion”